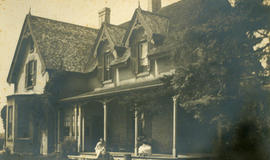 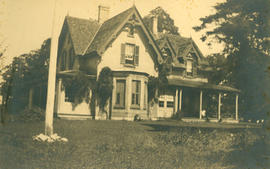 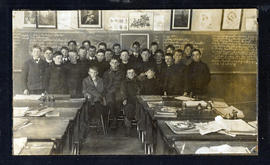 Samuel Leggott was born in 1825 in England. He immigrated with his wife to Rochester, New York and later moved to Canada in approximately 1851 with their two sons, Samuel Richard and Thomas Walter (1850-1932). Thomas became a Reverend and married Lydia Knight. Samuel Richard married Annie Trude of Lakefield; they had 3 children, Samuel Trude (Truddie), William and Henrietta (Etta). Samuel Trude married Dora Pemberthy. He joined the Gas and Electricity Inspection Service with the Department of Trade and Commerce in 1922. In 1923, he was stationed in Belleville where in 1938 he became the District Inspector of Electricity and Gas. In 1905 the Leggott family purchased Reydon Manor (200 Queen Street Lakefield ON), the former home of Robert Strickland, son of Samuel Strickland.

This fonds was created by the Leggott family and in the custody of Susan Taylor before it was donated to Trent University Archives.

Some of the items are brittle and very fragile. Handle with care and do not photocopy. Some of the photographs have been encapsulated in mylar.

Fonds acquired in 2010 from Susan Taylor.

In some sources there are variations of the name Leggott, i.e. Leggot, Leggett, Legget.

We gratefully acknowledge the assistance of students in Fleming College's 2011 Archival Management class who helped to process this collection.