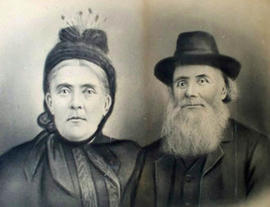 Hugh Caldwell Sr. (1824-1903) emigrated to Canada from Scotland in 1843 to the Waterloo area with his father and siblings. He married Ann Nancy MacDonald (1832-1903) in 1855 and settled in Mornington Township, Perth County. In January 1867, he sold his farm and tenant farmed near Strathroy, Ontario for some months before purchasing Lots 16 and 17, Concession 13 in Chandos Township, Peterborough County where he settled in December of that year. In 1875, he was appointed to the position of property assessor for Chandos, Anstruther, and Burleigh townships and held this position at various times until 1890. He opened the first post office in the Clydesdale Settlement of Chandos Township in his house; His son, Hugh Caldwell Jr. [1861-1914] lived part of his adult life in the Emo, Ontario area. Hugh Caldwell Sr. was the great-great grandfather of Leonard Caldwell and his siblings. Hugh Caldwell Jr. was a great uncle.

This fonds was donated from an unknown source.

A transcript of the diary is available.

A photograph of Hugh and Annie Caldwell, courtesy of Leonard Caldwell, is available.