This fonds consists of a retail day book of the Aikenhead Hardware Company for July 10, 1835 to September 5, 1839, with the currency being recorded in pounds, shillings and pence. The fonds also contains wholesale price lists of the Aikenhead Company from 1895 to 1899; a commemorative booklet of the company for its 100th year and a nine-page history of the company. The Aikenhead Hardware Company was established in Toronto in 1830 and played a very significant role, in providing to early settlers, tools and equipment to build their homes and businesses.

The fonds consists of registers of baptisms, marriages and burials of Albany Parish in the Diocese of Moosonee from 1859 to 1966.

This fonds consists of records of Dr. James Robbins Kidd pertaining to the founding and operation of the Indian-Eskimo Association of Canada (later to become the Canadian Association in Support of Native Peoples). It includes correspondence, notes, memoranda, news clippings, minutes, transcripts of speeches, conference reports, and assorted government publications.

The fonds consists of concert and theatre programs from Millbrook, Ontario; World War I materials including prisoner-of-war post cards, and photographs; and theatre programs, menus and other material relating to entertainments which allied prisoners in German war camps devised for their own amusement and which were collected by Lieutenant W.E. Massey-Cooke.

This fonds consists of microfiche copies of manuscript diaries written by King covering his university education, entry into the civil service, achievements as Minister of Labour and his election in 1919 as Leader of the Liberal Party, the Liberal victory of 1921 and the King-Byng controversy. The manuscripts are contained in consecutively numbered fiches. Typewritten transcripts of the diaries are included in a second series of microfiches. Also included are various private typewritten diaries relating to international relations and industrial relations. An index accompanies the microfiches. The records in this fonds range from 1893 to 1931.

Collection consists of a photograph album containing 188 photographs and newspaper clippings of soldiers from Bobcaygeon, Ontario who served in WWII. Also included is a booklet entitled "The Royal Canadian Legion, Bobcaygeon Branch 239, 1932-1992.

This item is a journal of events kept by the Post Manager at Eastmain, Outfit 260, James Bay District of the Hudson's Bay Company. His instructions were to record weather conditions, temperatures, activities of Inuit and Native fur trade, animal and bird migration patterns, supply ship and passenger activity, mail arrivals and news of Revillon Freres at an adjoining post. A transcription of the Journal is available.

This fonds consists of research material, mostly in copy form, created during the writing of This Green and Pleasant Land.

This addition to the fonds consists of correspondence between Scott Medd and his sister Miss Mary Medd of Peterborough, Ontario. The correspondence is from the later period of their lives. There are also photographs of the Medd and Daniels families.

This fonds consists of the original and collected papers of E.C. Guillet, relating to his works and research on the Trent Valley/Peterborough/Kawartha area. Included is correspondence, primarily with George M. Douglas and Helen Marryat; maps (photocopies); newspaper articles regarding above area; collected manuscripts of historical authors; photographs; and Guillet's own unpublished manuscript of Canadian Literary Pioneers. 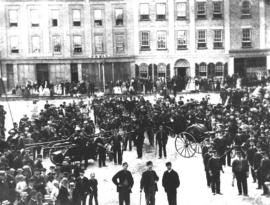 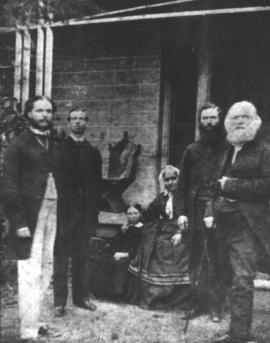 Fonds consists of Harley Cummings' research material for Early Days in Haliburton, published in 1963. Included are original wage lists, letters, receipts, accounting records, and agreements of the Ottawa logging company, Bronsons and Weston, with several documents relating to their York Branch operation. Documents relating to business transactions with the Boyd lumbering company of Bobcaygeon, and with individuals along the Peterson Road and Bobcaygeon Road who provided supplies and lodging for the workers comprise a part of the holdings. Mentioned are the Egan Farm in Dungannon Township, Hastings County, and the Bruton Farm on the Peterson Road in Haliburton County. There are references, too, to the operation of cadges between locations (commercial carriers which transported supplies by horses and sleigh/buggy). Also included are copy maps; photographs; notes; handwritten transcriptions of diaries of Alexander Niven and of Mrs. C.R. Stewart; and photographs of Lillian de Grassi Boyd, the Blomfield [Blumfield] family of Lakefield, and the Strickland homestead in Lakefield.