This addition to the fonds consists of Peterborough Petes hockey team memorabilia for the 1983-1985 hockey season.

This addition to the fonds consists primarily of programs, newspaper clippings, and magazines relating to the Peterborough Petes Junior hockey team and the Ontario Hockey League. Also included are photographs (photocopies only) of Peterborough buildings taken by Marlow Banks between 1940 and 1997 and published as a series in the Peterborough Examiner.

The fonds consists of a scrapbook relating to Marmaduke Matthew's office as secretary of the Canadian Academy of Arts, from 1878 to 1888; two unpublished manuscripts on Canadian art and artists; two sketchbooks, from 1863 and 1873 to 1874; and a record of pictures, from 1890 to 1908.

This item is the marriage certificate of Henry Lapp of Baltimore, Canada West, and Hannah Hoag of Ausable who were married before the religious society of Friends at Westlake on April 27, 1848. 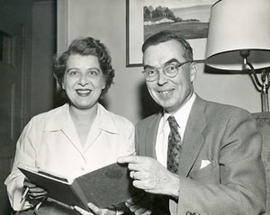 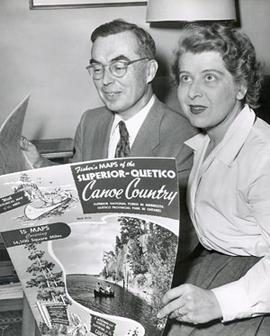 Fonds consists of correspondence and photographs related to the careers and the private lives of Martha and Kenneth Kidd.

Fonds consists of correspondence, photographs, research materials, and manuscripts and published articles related to the careers and the private lives of Martha and Kenneth Kidd.

The fonds consists of audio cassettes containing biographical and issue-oriented interviews of Professor Emeritus, Kenneth Kidd, conducted by Mary Anne Haney as part of her research for a paper in Canadian Studies 400.

The fonds consists of manuscripts of poetry; printed poems of Alice Roger Collins; and two letters from Alice Roger Collins (October 30, 1946; February 21, 1948) discussing personal matters, post World War II conditions, and her teaching of music at Walkerton, Ontario. The poetry is presumably by A.R. Collins, some of which is dedicated to 'Fergie' - in ink and pencil, and of a religious nature.

This fonds consists of Mary Ollerhead's notebook with teaching notes. At the back of the book are notes pertaining to her estate after she died. There are a number of notes that Mary wrote pertaining to her estate and funeral arrangements. A carbon copy relating to her will and some sympathy cards are also included. There is a collection of bank books from 1937 to 1953 included in the fonds as well as a retirement letter from the Toronto Board of Education and a few other articles of correspondence.

The fonds consists of a selection of photocopies of records from the Mary S. Edgar Papers from Queen's University Archives. Included are: correspondence, diaries, and biographical notes. The records deal primarily with Mary Edgar's involvement in organized children's camping at her Camp Glen Bernard, near Sundridge, Ontario. The records range from 1920 to 1970.

This item is a diary of a European tour from 2 July to 4 September 1914, and of boat trip aboard the SS Megantic (Montreal, Quebec, to Liverpool, England). There are also passenger lists, menus, and postcards included in the diary. The diary has some references to the outbreak of World War I, and the removal of British subjects from the continent. There is also one piece of correspondence included dated 6 September 1914. The diary chronicles a tour through England, France, Holland, Belgium, Germany and Switzerland.

Collection consists of six registers maintained by the Mather Funeral Home, Keene, Ontario. Volume 1 (1880-1903) was strictly a funeral register. Volume 2 (1910-1928) consists of a day book for a cabinet maker and carriage maker who also handled funerals by providing caskets, embalming services, wreaths, shrouds and so forth. Remaining registers recorded funerals only. The registers record names of deceased, age, cause of death and where buried.

This fonds consists primarily of the correspondence of Scott Ackerman Medd to his parents Sidney Taylor Medd and Estelle Lumsden Ackerman and his sister Mary E. Medd. The correspondence covers such topics as Scott's education at Trinity College School in Port Hope and at the Royal Academy in London, England, his development as and artist, life in England, and World War II. The fonds also contains the family records of Thomas and Mary Medd consisting of emigration and settlement letters, 1819-1919; correspondence to Robert Medd, 1820-1852; and correspondence to and from Sidney Taylor Medd during World War I. Also included are photographs of various members of the Medd family and sketches and sketchbooks of Scott Ackerman Medd.